You can know someone for years before you see their true colors.

Around two decades ago, I met a man named Bascombe Wilson through a mutual friend I don’t wish to embarrass by naming here. 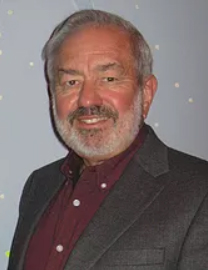 Wilson is now Executive Vice President, Chief of International Programs and Director of Research for The International Association for
Disaster Preparedness and Response (DERA), an international NGO.  Wilson has been associated with DERA since I met him, as far as I know.

I hadn’t heard from Mr. Wilson for quite some time, and then he appeared on my Facebook feed some time in the last year or so.

His bias on the issues surrounding COVID19 started with a denial that he had noted leftists and the media apparently enjoying the collapse of the economy and stock market due to the pandemic.

He made a statement that the Trump Administration’s response had been too slow.  I posted the following image on Facebook and tagged him. 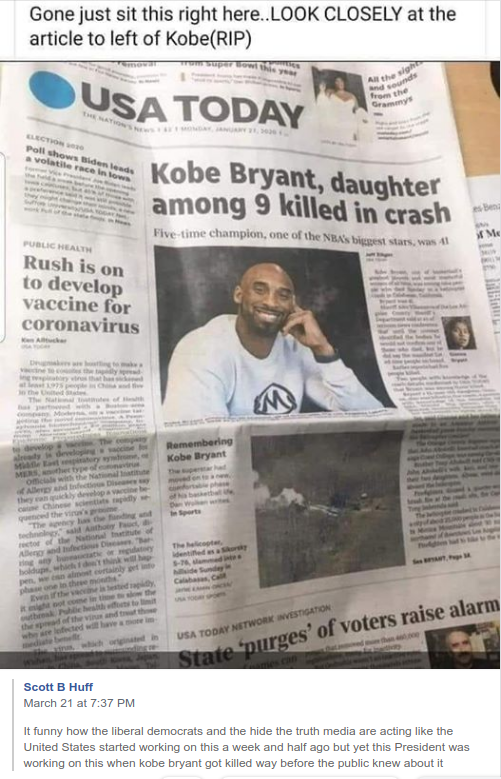 Above we see a picture of the front page of USA Today from late January.  So clearly someone was working on the issue two months ago.  This was Wilson’s response:

His clear claim above is that President Trump did nothing until March 13, that until then the President had treated it as a “public relations opportunity”.  I responded with this: 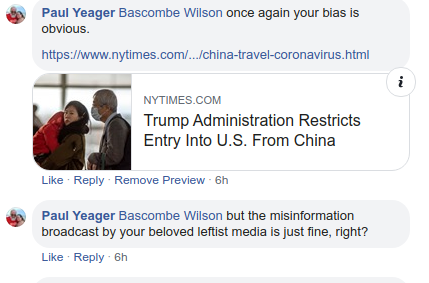 The link above is to a New York Times article dated January 31, 2020.  I think most reasonable people would consider blocking travel from China a significant action – a logical response to a “serious problem”.  In fact, I am pretty sure quite a few leftists decried it as an overreaction.   This was Wilson’s response:

Wilson conveniently ignores the evidence of significant action long before March 13, and decries the travel ban as insufficient.  Like any good propagandist, he moved the goalposts. 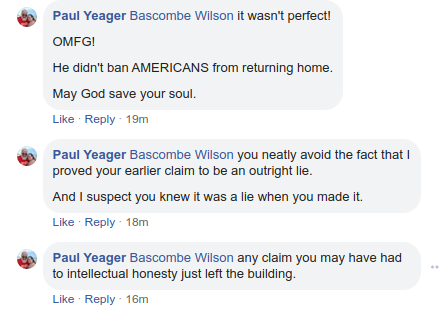 I expect to be blocked by him soon.  Not going to lose sleep over it.